In the middle of moving from the cabin-in-the-woods to the-house-in-the-town I had to take one of my dogs on her final journey. I still haven’t completed the move, but we’re getting there. So, probably no surprise that I’m reflecting on the effects of stress on creativity.

One of the things writing has taught me is the importance of accepting something is OK and moving on with it. I am the world’s worst decision-maker. Give me a simple choice between two items and I will call a friend, look it up online, ask the audience, anything rather than decide, because a decision might be the wrong one… I’m working on it.

Writing mysteries requires a lot of decisions. I’m a pantser, aka a discovery writer, which means I have only a vague idea about what the story is. I make a lot of notes and then just begin at the beginning. Inevitably I write myself into a corner every few thousand words. So, who did kill x? Why the h… would he go there? Surely they would just have rung up? I find that the best way to solve these problems is to write them down, do something else and wait. The answer often appears. If it doesn’t I scribble every possible solution until I get the right one and then I carry on until the next problem.

That’s the creative process. I try to transfer the same techniques to real life, but what about the other way round? Turns out the lesson is the same: wait.

So, I didn’t write for a few days. I sat in my new house and watched the rain. Took the other dog for lots of little walks and in the fullness of time, the urge to carry on with my story came back. The house move will get done. Jelly-dog and I will get used to not having Hetty around and the story will get written.

Apologies for the miserable post. Normal service will return soon. 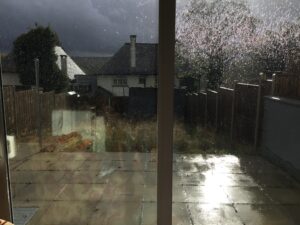 I have always wanted a long case clock, aka a grandfather clock. I have no idea why, and I have never shared a house with anyone who understood my craving. To be honest, I’ve never lived anywhere that such a clock would fit. All that has now changed. I have a clock, and it will be joining me in a new (to me) house, where I will take pleasure from looking at it every day. It won’t fit – the clock is from 1938, and the house from 1960-something, but I don’t care.

I find as I get older that I care less about whether things fit, or whether other people will share my taste in objects, clothes or furnishings. So for my new house I have not bought anything sensible. I have a canteen of silver plated cutlery, which I will be using every day. I have a collection of willow-pattern china, which I will also be using even though no two pieces match.

The local antique emporium will be providing a dressing table and a couple of dining chairs. I will buy a bed and a sofa. The previous owner is leaving a ginormous fridge-freezer and a range cooker large enough for a restaurant. As the owner of the grand total of three saucepans and a wooden spoon, I probably won’t get full use from the kitchen…

But who cares? I have a long case clock.

I had a plan to write a book about Charlie, Daniel Owen’s frequent sidekick and friend. I started the book, and I have a clear story that I want to tell. I have the book cover (which is gorgeous). But then Paul Qayf got in the way, and insisted that I told his story first. Now I know and you know that these people aren’t real, but Paul didn’t get the email, and kept banging away until I agreed. That meant another book set in Kent, though a different area this time.

I used to live in South London, and Kent was the nearest area of wild country, so I spent a lot of time exploring. Even after I moved to Wales I visited regularly, including spending time in the Medway area. I’ve messed around with the geography to obscure where the events in the book take place. If Dickens can do it, so can I. Ledmarsh does not exist, except in my imagination. But the river and the forts are real (although the fort at Ledmarsh is a mash-up of several real forts).

Forts of all ages cover the Medway–and the whole coast of Britain, and the more I researched them, the more obsessed I became. Many of the forts have simply been abandoned to the urban explorers and the sea birds. Some have been turned into houses, holiday destinations, or museums. At the time of writing there is one for sale off the south Hampshire coast for £3million–and you need a helicopter to get there. Great views though.

The forts built to repel Napoleon’s ships are the model for the fort at Ledmarsh. They were built (with obvious care, and lovely details) and then hardly used.

The forts in my picture were used, not just in war, but also by pirate radio stations. I think they look like alien invaders, and I can’t imagine how frightening t must have been to have served in one, high up above the waves, with only the spindly legs to keep you safe. By contrast the Napoleon-era forts like my imaginary Ledmarsh fort, were massive and heavy, built on solid ground.

I did most of the research for this book online, but I have a firm plan to go fort-visiting next year. But first I have Charlie’s book to finish.